Scapegoating Immigrants in the Covid-19 Pandemic

Immigrants are once again the targets of draconian policymaking. It is during the COVID-19 pandemic this time.

Immigrants are once again the targets of draconian policymaking. It is during the COVID-19 pandemic this time.[1] Through a series of presidential proclamations and other executive branch maneuvers, the Trump Administration is attempting to leverage a host of so-called migration management tools to ban entry and force some immigrant to leave the country—all under the guise of containing the spread of the coronavirus and protecting American jobs (see Table 1).[2]

In addition to travel bans from multiple countries and a near total shutdown of the northern and southern borders, the Trump Administration’s migration management efforts target not only unauthorized immigrants but also asylum seekers, family members of legal permanent residents, temporary workers (agricultural & high tech), and international students. Migration management applies to nearly every person seeking entry to U.S. on an immigrant visa or nonimmigrant visas.[3]

Some assert that the Trump Administration is merely using the coronavirus pandemic as an excuse to continue pursuing an anti-immigration and anti-immigrant agenda.[4] Others question the purported link between international migration and spread of the coronavirus, noting that community spread is far more important than migration in population exposure to the deadly disease.[5] Beyond these valid critiques, the administration’s migration management proposals are problematic for other reasons, which have enormous implications for the future health, social wellbeing, and economic viability for our nation moving forward.

First, the migrant management proposals are a manifestation of demographic myopia. The Trump Administration is erecting barriers to immigration precisely at the time the U.S. native-born population is aging and experiencing both below replacement level fertility and deaths of despair among the prime working age, less than college-educated demographic.[6] Together with high rates of COVID-19 related deaths among working age people of color, these demographic developments will have a profound effect on the U.S. labor supply in the years ahead, especially as the 81 million baby boomers—individuals born between 1946 and 1964–continue to exit the workforce.[7] Most immigrants are young and in their childbearing years. We are going to need them to both fuel population growth and propel the U.S. economy in the global marketplace as workers and business owners.

Second, combined with a host of other zero-tolerance immigration policies and practices proposed or implemented prior to the COVID-19 pandemic, current efforts to “manage” migration are also a form of economic myopia. Clouded by the unfounded or dubious claim that immigrants cost more than they contribute to American society, there is a clear failure to recognize or acknowledge the direct, indirect, and induced effects of immigration on employment and consumer spending. Above and beyond the toils of their labor, substantial economic and tax benefits accrue from the immigrant newcomers’ consumer spending for housing, cars, and gasoline as well as other consumer goods and services—benefits that typically far outweigh any government expenditures for such services as K-12 education, health care, and criminal justice. [8]

Moreover, whenever a new immigrant group arrives, they are responsible for a net gain of “spillover” jobs in economic sectors that support their specific needs or consumer preferences for goods and services. In a 2006 study conducted for the North Carolina Bankers Association, we found, for example, that Hispanic newcomers to North Carolina were responsible the creation of 86,000 such spillover jobs.[9] We found similar spillover job creation in two studies of Hispanic and immigrant newcomers to Arkansas and in a follow-up North Carolina study in 2014.[10]

What happens, then, when immigrants are forced to leave a community? Notably—and not inconsequential–there are parallel negative economic and employment impacts: losses of both business and tax revenue from immigrant consumer spending as well those spillover jobs that supported their presence in the community. Making matters worse, the negative externality effects of those losses reverberate through all sectors of the economy, including most notably housing, retail, and hospitality services.

Third, beyond the direct, indirect, and induced effects of the loss of immigrant consumer spending, the Trump Administration’s migration management efforts will adversely affect economic productivity and the viability of firms in nearly every sector of the U.S. economy. Immigrants are widely dispersed throughout the U.S. economy—in blue- , pink-, and white-collar occupations. They are overrepresented in the low-skilled 3D jobs–that is, jobs that native-born workers do not want because they are difficult, dirty, and dangerous–and in high skilled jobs in the STEM fields.

Most notably, immigrants account for a significant share of America’s essential workforce in health care and other sectors that are instrumental in controlling and combating the spread of the coronavirus, as well as caring for those infected by the deadly disease. Already stretched to its limits, this segment of our workforce is likely to face major labor supply issues, especially if infections rates continue to climb and some existing essential workers decide to vote with their feet in response to the high risk of exposure to the deadly coronavirus. While some aspiring immigrants, who would qualify as essential workers, are exempt from the Trump Administration’s migration management protocols, it is not at all clear that they will consider a temporary or permanent move to the U.S. given the Trump Administration’s widely publicized negative stance on immigration and inhumane treatment of immigrants.

Fourth, recent presidential proclamations and executive orders to manage migration also substantially reduce the innovation capacity of our nation. Immigrants are highly concentrated in university-, government-, and private sector-based research labs that we rely upon for scientific and technological breakthroughs that allow us to maintain a competitive edge in the global marketplace. Banning immigrants seeking green cards for permanent residency, shutting down the H1 B visa program, and travel bans from certain countries limit access to critical talent that, among other things, could potentially contribute to the development of a vaccine to curtail the spread of the coronavirus. Moreover, curtailing temporary work visas, especially those for high tech workers, will likely have the perverse effect of accelerating the offshore movement of white-collar jobs.

Finally, the most recent memorandum seeks to bar people in the U.S. illegally from being counted in congressional reapportionment. The Census Bureau reports that 90 million households have responded to the 2020 Census, the majority online. In areas where there have been no responses, door-to-door census takers will be going to households. The Census count determines the distribution of $675 billion in federal spending as well as how many congressional districts are apportioned to states. Fear of responding because of illegal relatives dampens numbers and harms underserved and rural communities in the formula for funding.

Immigrants played a pivotal historical role in transforming the U.S. into an internationally recognized economic superpower. Today, they are instrumental actors in producing the food we consume, maintaining and upgrading our physical infrastructure, advancing our health and well- being, and ensuring in numerous other innovative and creative ways our continued competiveness in a highly volatile global market place.

At least one innovative policy remains intact: the EB-5 Immigrant Investor Visa Program.[14] Created by Congress in the Immigration Act of 1990, EB-5 sets forth a process for eligible immigrant investors to become lawful permanent residents by investing in a business that will employ at least 10 American workers. Rural and high unemployment regions, called “targeted employment areas,” are typically the recipient of the investment. In 1992, Congress created the EB-5 Regional Center to stimulate capital investment by foreign entrepreneurs through the 800- plus regional investor pools as federally approved intermediaries.[15]

More than 78,000 investors from primarily China, South Korea, Taiwan and the United Kingdom have used the Regional Center Program, which has been extended through September 30, 2020.[16] While the program supports much needed capital in real estate projects that initially create construction jobs and then service jobs, there also have been infrastructure projects for road and rail, technology centers, congregate senior living facilities, and charter schools. A 2017 U.S. Department of Commerce study found that the program created more than 170,000 jobs in federal fiscal year 2012-2013.[17]

EB-5 is often part of the capital stack for a real estate or infrastructure project and is an underutilized impact investment tool. Because the government does not release detailed data on EB-5 investments, the specific impact is difficult to measure, and there are few knowledgeable practitioners in philanthropy, business, or government who understand the rather complex program.

A second policy innovation, not yet enacted into law, comes from the Economic Innovation Group (EIG). In an April 2019 report, EIG outlined the core elements of an employment-based visas program—dubbed “the Heartland Visa”[18] —to incentivize population growth by allowing skilled immigrants to work in U.S. rural and underserved areas experiencing decline, similar to the Australian and Canadian place-based visas. Emblematic of the need for such a program, U.S. rural and micropolitan counties with between 10,000 and 20,000 inhabitants loss population, while 71% of all metropolitan counties gained population, between 2008 and 2017.[19]

Scapegoating immigrants will neither curtail the spread of the coronavirus nor address the enormous unemployment problems cause by the forced shutdown of the U.S. economy.[20] Moving forward, given the demographic headwinds our nation faces, it a strategic imperative to embrace immigrants as part of the solution as opposed to part of the problem.[21] To do otherwise is to shoot-ourselves in the foot—demographically, economically, and geopolitically. 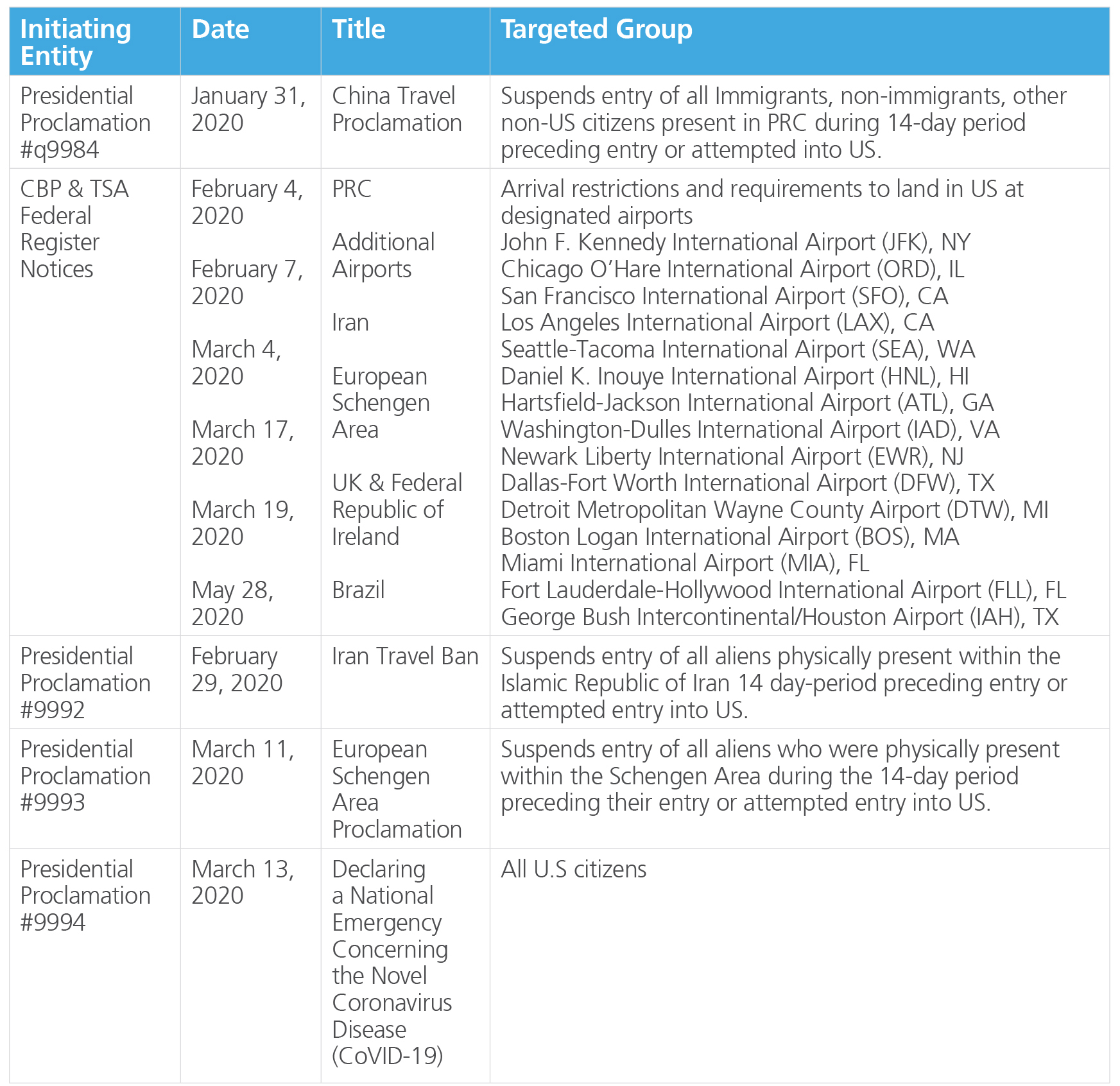 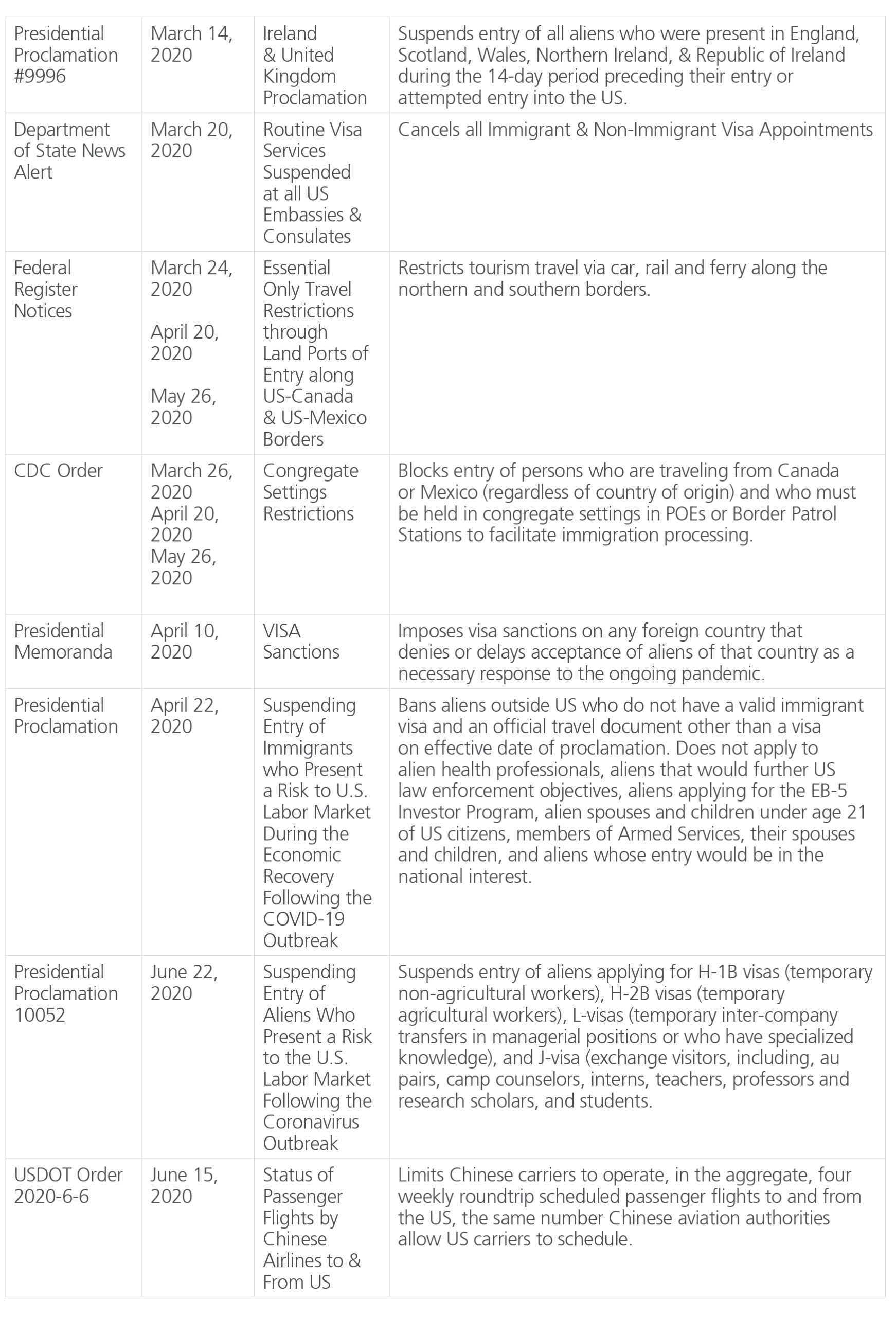 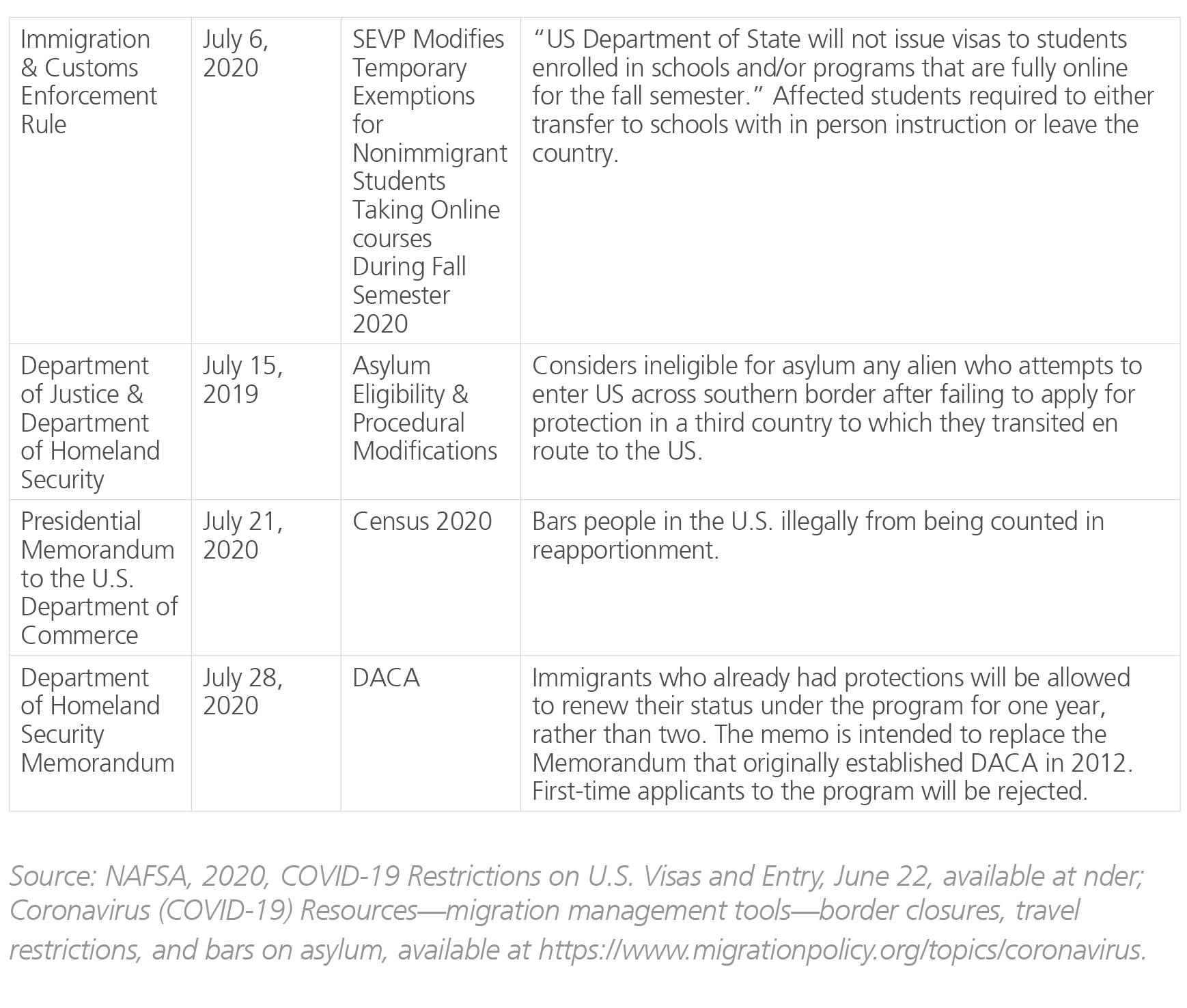 [3] As one write noted, “even during earlier crises, such as the Great Depression, the two world wars, and the horrific flu pandemic of 1918-19, the U.S. did not categorically ban the entry of virtually all immigrants seeking to settle permanently.” See Ilya Somin, 2020, the Dangers of America’s Coronavirus Immigration Bans, The Atlantic, June 28, available at https://www.theatlantic.com/ideas/archive/2020/06/danger-americas-coronavirus-immigration-bans/613537/.

[17] U.S. Department of Commerce, Estimating the Investment and Job Creation Impact of the EB-5 Program, Economics and Statistics Administration, Office of the Chief Economist, available at https://www.commerce.gov/sites/default/files/migrated/reports/estimating-the-investment-and-job-creation-impact-of-the-eb-5-program_0.pdf

[19] David Swenson, 2019, Most of America’s Rural Areas Are Doomed, The Conversation, May 7, available at https://theconversation.com/most-of-americas-rural-areas-are-doomed-to-decline-115343.

[20] Abhinav Chugh, 2020, Will COVID-19 Change How We Think About Migration and Migrant Workers? The World Economic Forum COVID Action Platform, May 22, available at https://www.weforum.org/agenda/2020/05/covid-19-coronavirus-migration-migrant-workers-immigration-policy-health-securitization-risk-travel-bubbles/; Michelle L. O’Brien and Maureen A. Eger, 2020, COVID-19 Will Have Long-Lasting Effects on Migration, Fair Observer, May 14, https://www.weforum.org/agenda/2020/05/covid-19-coronavirus-migration-migrant-workers-immigration-policy-health-securitization-risk-travel-bubbles/

[21] One study suggests that an alternative to blanket exclusion of immigrants is to “impose a 14-day quarantine on entrants from potentially dangerous areas,” a strategy employed by South Korea which has done a better job than the US containing the spread of the virus. The study goes on to note that “[i]mmigrants can be isolated until it is clear they do not have the virus,”  which is an estimated “small price to pay for the chance to live in a society that offers greater freedom and opportunity.” A targeted quarantine strategy for incoming migrants also would likely reduce undocumented or illegal immigration—individuals who would have strong incentives to avoid testing for the virus and therefore facilitate community spread. See Marta Foresti, 2020, Less Gratitude, Please. How COVID-19 Reveals the Need for Migration Reform, May 22, available at https://www.brookings.edu/blog/future-development/2020/05/22/less-gratitude-please-how-covid-19-reveals-the-need-for-migration-reform/; Emma Graham-Harrison and Helena Smith, 2020, What is the future for Travel and Migration in age of Covid19? The Guardian, May 12, available at https://www.theguardian.com/world/2020/may/12/what-is-the-future-for-travel-and-immigration-in-age-of-covid-19. 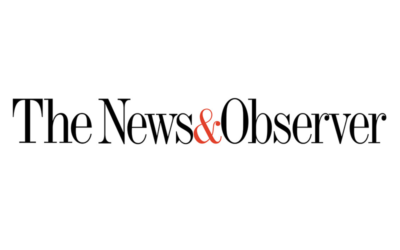 END_OF_DOCUMENT_TOKEN_TO_BE_REPLACED

The pandemic has underscored the relationship between our childcare systems and our nation’s economic and social health. A North Carolina project looks at how we need to improve.

END_OF_DOCUMENT_TOKEN_TO_BE_REPLACED 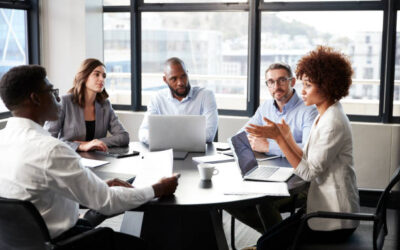